At the beginning of every school year, it is important to find time to review with your students. This time is not only crucial to see where they are on their math skills but also to observe how each of them works together in a small group setting. Using games, such as Tumbling Towers, in the classroom is a beneficial way to have students interact with one another with a slight competition aspect as well.

Knowing that I wanted to have an activity that would have my students engaged but also working through multiple problems together as a group was part of my desire which is how I came to using Tumbling Towers in my classroom. I worked to get six sets of these Rainbow Tumbling Towers blocks for my classroom so that I would have enough for each group to work independently of one another.

How to Play Tumbling Towers 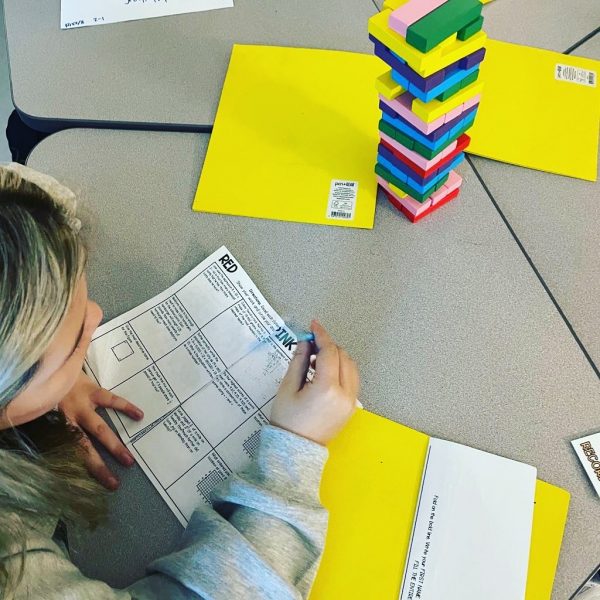 Each of the groups will receive a copy of the Tumbling Towers Game and a set of Tumbling Towers blocks. I chose to store my blocks in 13″ Large Iris Containers and they fit perfectly! I knew that the bags that they came with would not stand up over time so it was perfect to have them stored in these.

Next, the students build their towers upon a solid surface. This was something I had to enforce as they should be stable so they won’t topple too quickly.

Player 1, the leader of the group, rolls the color die first. The die comes with the set so no extra prep there! The color that the die lands on will tell them what block to pull from the tower.

After they have pulled the block from the tower, they turn to that section in their Tumbling Towers mini book and choose any question for their group to answer. ALL PLAYERS must answer the question in their mini book and agree on the answer before moving on to the next.

When the answer is agreed upon play moves to the next player in a clockwise motion. If they happen to answer all of the questions for one color, the player rolls again to get another color. If the tower tumbles, they pick it up and reset it. 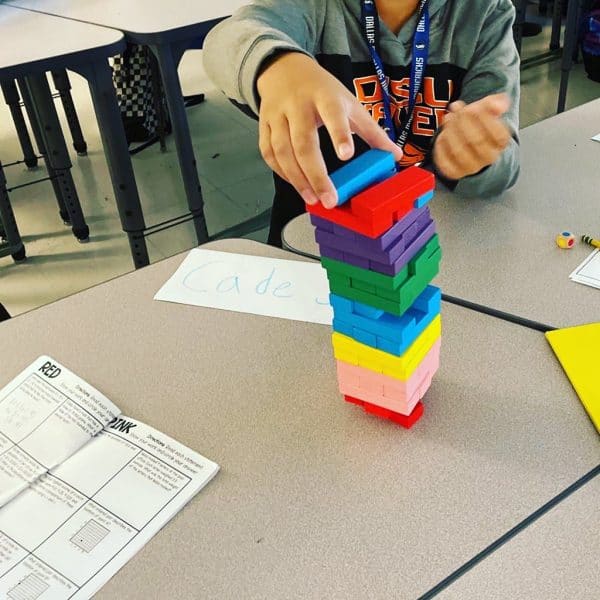 Seriously couldn’t get them to put the game down! They wanted to keep playing even after a SOLID 45 minutes of playing! I truly think that the magic of adding in the Tumbling Towers to answering questions made it a whole new thing for them and they were willing to keep answering the questions that I had give them.

I do think that it also helped that the questions they had were truly a review of skills from an area they had mastered. My Seventh Graders worked on the 5th Grade Review to start the year with because I knew that it would not leave them frustrated while playing whereas doing the 6th Grade Review at that time would. This would be where you could differentiate for your class as well because only you know best. 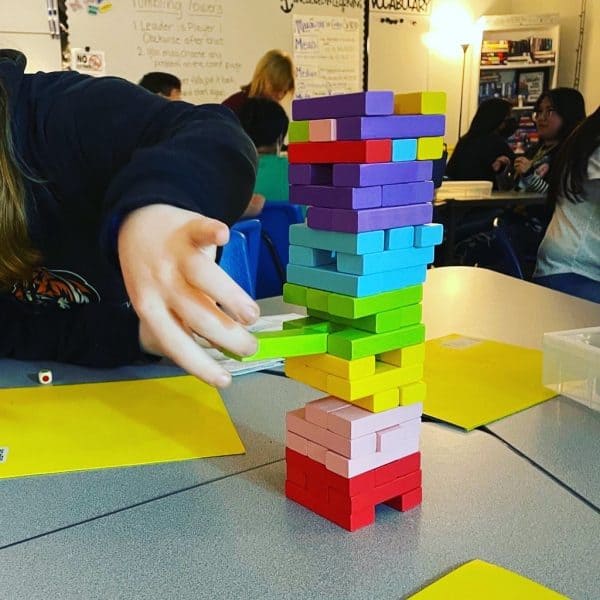 We did not grade these questions but rather used them to go over in small groups during Math Workshop so I could work with them individually on where any errors might have arisen for them.

I did have the students keep track of how many times their towers tumbled and gave reward card punches to the top three groups with the least amount of tumbles. This seemed to motivate them to work toward building a strategy of the blocks they pulled rather than tumbling it over without reason.

Due to how much my students LOVED this activity, I will definitely be creating more of these for their enjoyment as I think it would be a great way to review for a unit.