Seems like many teachers I have talked to recently are reviewing proportions with their students. Just last week Ms. M shared with me that her students were working on the Proportions Solve and Snip while I was reviewing how to set up proportions using WKU.

Ms. M‘s kiddos sure were hard at work and I love seeing all the work they are showing! Way to go!

My 8th grade students were reviewing for the second round of STAAR testing. I was working with the group of students who would be taking the Modified version of the test and this was the second time during remediation that we had gone over proportions. Let me tell you, I could see some light bulbs and it was AWESOME!

I reviewed WKU with them by showing them the quick video that I had made a couple years back and then we went out to use WKU ourselves.

What is WKU you ask? WKU stands for Word Ratio, Known Ratio and Unknown Ratio. It is so important for students to realize what they are comparing so that the ratios are set up correctly. 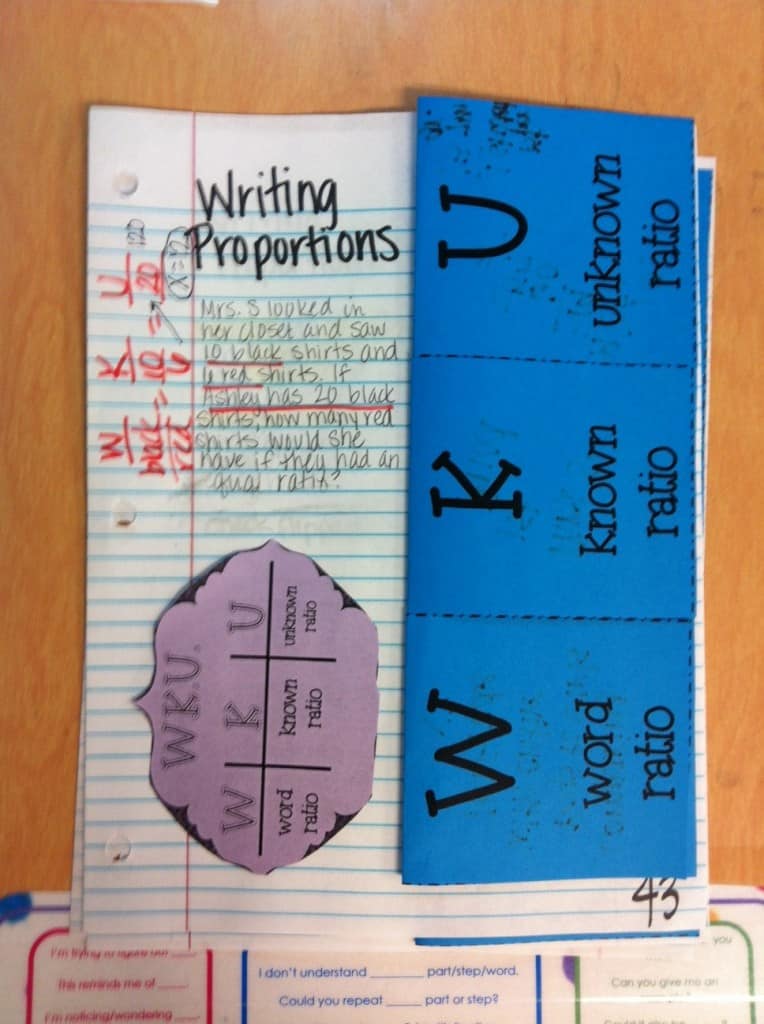 After you read the word problem, you have to ask yourself, “What am I comparing?” That is your WORD RATIO!

Now it’s time to ask yourself, “What comparison do I know both parts of?” That is my KNOWN RATIO!

And last, “What do I know part of?” That is your UNKNOWN RATIO!

This is always where I am able to review what a VARIABLE is and this set of the first round of light bulbs! Our unknown part of our proportion is filled in with a variable and we must then cross multiply to determine both sides of our equation.

Once we have our equation set up, it was time to remind them that the variable is a Party Pooper and doesn’t want to be with anyone on his side of the equation. So what do we use to get him by himself? {More lightbulbs!}

“Well I know I have to divide Mrs. S because that is the opposite of multiplication.” ROCK ON! I was so happy that Inverse Operations were connecting into the lesson not only because we hadn’t talked about them in awhile but because for many of my students it is abstract to do the opposite of what the equation states.

Moving right along it was time to divide away so our variable could be a party pooper. And this is where my students shined… “Mrs. S, we have to put our answer back into our proportion and see if they are equal. We can’t just stop because we got an answer.“

OH MY GOODNESS! Where did my students who HATED to check their work go? They were asking to do a problem again to check!

Yep, that was just one lesson this past week. Many more stories to come! 🙂

And while I was participating in #5thchat on Twitter on Tuesday night, this link was mentioned as a link for another game to practice the basics of proportions, Equivalent Fractions, and all you need is a deck of cards! (Do you follow me on Twitter? Why not? @SmithCurriculum)

My WKU Proportions Poster and Flippable can be found on Teachers Pay Teachers which contains notes for the teacher, mini posters and the WKU flippable for you to use right away.

Click Here to Learn about Professional Development Opportunities
Gotta pick, what say you? 3 for me! #teacherblog