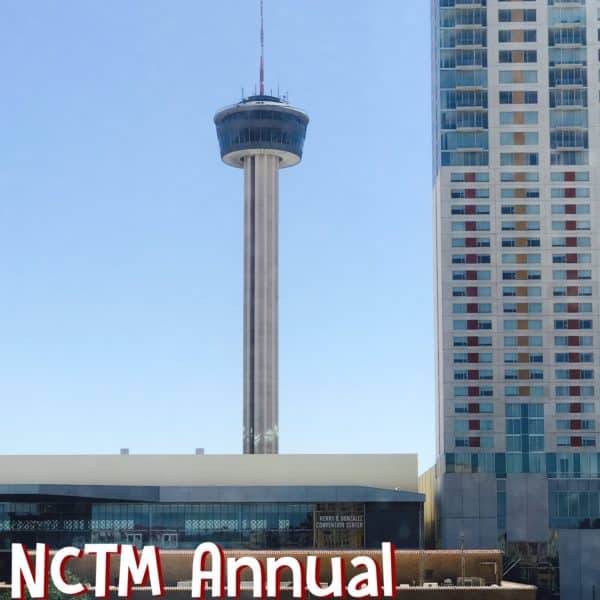 Here I am now almost a month after NCTM Annual Conference has passed and I am still enjoying all that I learned and did while I was there. It was definitely a conference worth going to if you are ever able.

So when I left off in the last post I had just wrapped up with my first round of the Exhibit Hall (yes, the first) and was on my way to another session.

The next session that I hit up was on Middle School Math Misconceptions and How to Help Students. I literally walked what felt like a mile for this session because I knew it was one that I wanted to go to and I even showed up an hour early to make sure I had a seat (I just slipped in on the previous session).

The two women who were presenting for this session went through several problems that they gave their students and then then the error that the students came up with for their answer. We as an audience were to engage with those around us and discuss what the error was and how we would remediate to correct this error. Then they had a few people from the crowd share each time. It truly is amazing how so many of the concepts we then related to money (fractions, decimals, percents, etc.) and then even more amazing was some really good teaching strategies that I had not ever heard of before.  Definitely a proponent for having time to vertically plan and collaborate with others that teach the same subject!

By the time I had finished that session it was time to trek back down to the exhibit hall and do some learning at a few different exhibitor booths that were having their own mini-sessions as well as those hosted in the exhibit hall. I tried to just engross myself in all that was being said and done during those and didn’t take notes… whoops!

Thursday night I ended up having dinner with a complete stranger. Yep, we math teachers do that kind of thing. We were literally waiting at a cross walk together and she asked a few of us around her where some places were to sit and get a quick bite to eat and the consensus was the mall. I stated that I was planning on going to Margaritaville at that moment for dinner before retiring to bed early and asked if she would like to join me. Off we went and enjoyed our dinner and were able to talk about math and teaching at the same time. Turns out she lives near where I grew up and was a first year teacher after having a previous career. Totally fun to get to hear from someone on the other end of the spectrum of teaching. It has been a long tine since I had chatted with someone during their first year.

Once I got back to my room I emptied my bag that weighed literally a TON and made a video of all the goodies for you to check out! You can see that video here (the giveaway is long since closed).

First of all, you know you learned a lot when you can’t sleep the night before because your brain is going a million different ways. Yep, that was me and I had plans to meet up with a Texas teacher for coffee at 7:30am. And you betcha, I was there… who needs sleep? Oh yea, I do! Guess that’s why I had to take a nap later on Friday.

The first session I went to on Friday was all about Instruction on Algebra Readiness Topics for Middle School in Tier 2. Yep, a MOUTHFUL! One of the key statements that the presenters (there were three) made was “Middle School students with difficulties struggle with more than just missed content but also the foundational skills of Algebra.”

After a brief synopsis of Response to Intervention and Progress Monitoring (more coming in future blog posts on that), we jumped into the need for Reversibility Questions, Generalization Questions and Flexibility Questions. I was writing notes feverishly during this session and left with my mind blow again! So much of what they were saying was aligning to what Dr. Bennett had said about Reasoning Talks in Middle School the day before (hint: more on that next week).

Change the way that the task is present to a way that then forces the students to think differently. Example: Find 2 three digit numbers whose sum is 544?

These questions force students to think about patterns and build connections on reasonability. These are the BIG IDEA questions.

These questions allow students to solve problems in multiple ways or apply multiple solutions. You also give a series of problems where they can use the first to solve the second and so on.

They also made a point about how we need to ditch the Show Your Work mindset and jump on board with the Show Your Thinking mindset. I think I might just make that a poster! 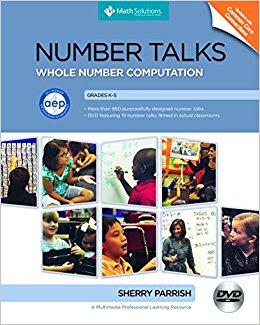 The next session that I went to was another Middle School Number Talks session by the infamous Sherry Parrish. I was first introduced to Sherry’s Number Talks when I was given a copy of her now famous Number Talks book (aff. link) when I was in Georgia to provide a professional development. I have also now purchase the follow up 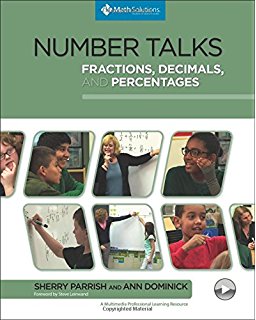 Number Talks for Fractions, Decimals and Percents book (aff. link) to further my knowledge as well. While immersing myself into what Sherry was saying about the computational side of number talks, some of the key takeaways I had were:

“We have to build a bridge from the way we were taught to the way our students are learning.“

“77% of community college students believe math is a set of tips, tricks and procedures.“

and “Students are reluctant to share for many reasons, some which we will probably never know. Turn and Talk allows students to become comfortable by collaborating with one other person and breaking down the fear.“

So… with that being said, after that session it was lunch and a nap time. I was wiped! By the time I woke up from my nap it was around 4pm and the sessions for the day were over. I soon also found out that the major highway that took me from San Antonio back home would be closing that evening for the ENTIRE WEEKEND! Well thanks for telling me ahead of time San Antonio! I decided to go ahead and head back home that night so that I could get ahead of the traffic as that highway is already horrible enough as it is but add onto it being the weekend and being CLOSED, no thank you!

I truly hope that you have enjoyed my recaps of all there was to learn at NCTM Annual Conference. I am sure that many more of the tidbits will find their way into the blog and into my upcoming conference sessions and/or professional development offerings!

Be on the lookout for a GUEST POST next week! It will be one that you won’t want to miss!

Click Here to Learn about Professional Development Opportunities
Anywhere else but Texas?

Ready to set those GOALS in your classroom (or per